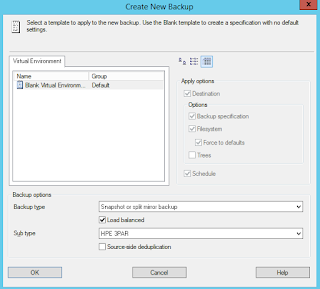 If you already have licenses for 3PAR snapshots (which most customers do) and you are using a Data Protector capacity license (which most recent customers are) then you can do this for free.

(Customers using Data Protector classic license need to pay for a ZDB license but they are surprisingly cheap.)

I've got a customer doing this right now, and they are getting around 250MB/s of backup speed (this is LAN-free, with a relatively old Windows server mounting the snapshot and then writing to a D2D4700 using Catalyst-over-Fibrechannel).

The documentation has a few holes (such as neglecting to mention that you need to use omnidbzdb --ompasswd to tell Data Protector which 3PAR account to use) but overall it seems to be more reliable than traditional VMware snapshots.


If this is something you want to do -- and it really does work very well -- let me know and I can organise licenses and/or implementation for you.
Greg Baker is an independent consultant who happens to do a lot of work on HPE DataProtector. He is the author of the only published books on HP Data Protector (http://www.ifost.org.au/books/#dp). He works with HPE and HPE partner companies to solve the hardest big-data problems (especially around backup). See more at IFOST's DataProtector pages at http://www.ifost.org.au/dataprotector, or visit the online store for Data Protector products, licenses and renewals at http://store.data-protector.net/