The cities of endless summer -- how is our weather changing (2018 version)?

TL;DR -- it's getting hotter. No matter which city I look at, if someone has been taking temperature measurements for a few decades, I keep seeing the same trend. One degree of warming every 40-60 years, and a trend towards fewer cool days, and more hot days.

In 2017 I wrote a blog post -- http://blog.ifost.org.au/2017/01/farewell-to-cold-winters-and-hello.html -- inspired by the heat wave that Sydney was experiencing at the time. Funnily enough, it's the last day of 2018 and we're having another heatwave. I've updated some of the charts, and created a new Jupyter notebook.

All the examples I'm showing here are in github. If you are learning data science, it shows
some useful techniques (pandas, zipfiles, linear models).
https://github.com/solresol/endless-summer/blob/master/cities-of-summer.ipynb


It "feels like" winter in Sydney when the maximum temperature is below 20. It means you have the heater on (or for me it means I need to light a fire). It feels like summer when the minimum temperature is above 20; you have to sleep with at least a fan and you can dive into the pool or sea any time of the data or night and it isn't uncomfortable.

Let's just put that in perspective. 100 years ago, sweltering days where the temperature never got below 20 were really rare. Here's the complete list of them from 1918.

We've had more than that in the last two weeks of December 2018. We might even have 7 days continuously if this heatwave stays.

So is Sydney becoming the city of endless Summer?

Here's a chart, counting the number of hot days and cold days in Sydney since records began:


We can plot the difference between those two charts. For each year, how many cold days were there, and how many hot nights were there?

I'm guessing around 2020, even though the trendline suggests it won't happen until 2030 or later.

We'll declare Sydney the city of summer, because we won't have much of a winter.


It shouldn't be that surprising though. Here are the maximum and minimum temperatures averaged out over each year. It is rising inexorably warmer.

Just for good measure I did an ordinary least squares regression. It turned out to give almost the same answer as Theil-Sen does, which suggests really hetereoskedastic data. The maximum temperature is going up at a rate of 0.023 degrees per year (one degree every 43 years, roughly). The minimum temperature is going up slightly slower (0.020 degrees per year, so almost exactly 50 years for one degree).


Here's Melbourne's minimum temperature (well, actually, it's of Laverton RAAF base because it's about the longest series of measurements I could find).


And just to be clear: this has nothing to do with the urban heat island effect. Here's Alice Springs, which is basically a country town in the middle of the desert. 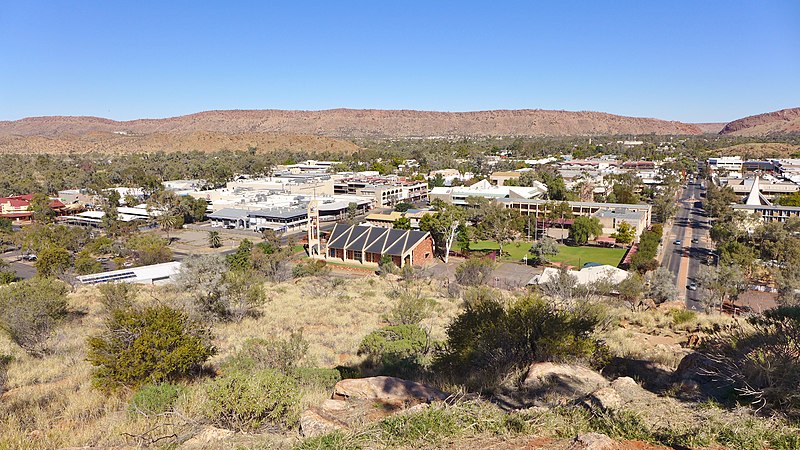 Regression coefficient is very similar to Sydney: 0.023, or one degree every 43 years.

Murwillumbah is approximately 100km south of Brisbane, so just a teeny bit cooler. Complete records only date back to 1973, but it was either that or Cape Morton lighthouse. It's the best I've got unless someone has some temperature records for somewhere closer to Brisbane.

Anyway, the same trend is apparent, and Sydney now is about where Murwillumbah was at the beginning of their records.

It's getting warmer, right across Australia. In some ways Sydney in the 2020s is going to be like Murwillumbah was like in the 1970s.
Posted by Greg Baker at 23:16