Many of the interesting and well-read women in your life (if you are a woman, this probably includes yourself) read Heidi when they were young, or had it read to them. The story of this young orphan girl in Switzerland has captured everyone's hearts for over a century, as did the sequels Heidi's Children and Heidi Grows Up.
But the fourth book in the series -- Grandma Heidi -- was never translated into English until now, when my daughter and I completed it.
There’s a bit of a backstory to it... 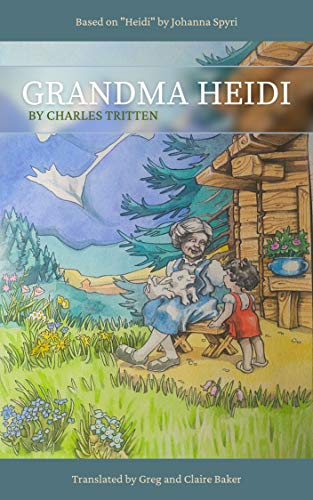 Growing up, there had been this one mysterious book — written in French — in the household. It had pretty pictures in it, but until I went to high school, I couldn’t even begin to read it.
Even when I had studied some French, it was still heavy going.

I was one of the worst French students in my family. My brother is actually quite fluent, having spent some time in New Caledonia, and acquiring a very amusing New Caledonian accent. My mother has spent more time in France than I ever did; and my father studied it for his leaving certificate. I dropped it at the end of year 10 (4th form as it was known at the time) before I started my pipe-organ building apprenticeship. I wrote my end-of-year French exam left-handed just to practice — that’s how little I cared about French. Sorry, Ms Kviz, it wasn’t your teaching.

It was doomed to end badly. I translated two sentences that day in 1990 and got stuck on the third.

But I promised to finish it later.

In my family we have an alphabetic Christmas tradition — each year the presents begin with the next letter of the alphabet, which for the year 2020 was the letter “T”. So I finished the translation (30 years after I promised to do it, and with a lot of help from my daughter, who started French in kindergarten) and gave it to her for Christmas.

At the end of last year as I was wrapping up the first draft, I found that a lot of the women in my life started asking about it. Heidi was a part of their childhood, and they would like to know how it ends, so I’ve decided to publish it. I had some delightful watercolours done — based on the original that I was working from.