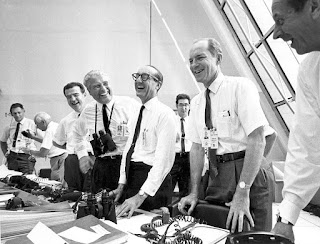 ISO9000 was -- to some extent -- the translation of the engineering practices that supported the space program in the 1960s into the world of business: keep your documents controlled, make sure you know that what you are doing is working, and so on.
The equivalent of 1960s space engineering in the modern day is software engineering, and the practices that have been developed by software teams will form the basis of best-practice management in another decade or two's time.
What practices am I talk about? What is it that software teams do, that is so obviously right that it barely gets mentioned, but is so obviously lacking from non-software business management? (Put another way: non-software business managers drown in email to the point of unproductivity. Why is that? And what does github do which happens to solve these problems?)
Anything else I should add to this list?
We always talk of the incredible failures of software engineering -- and there are many, and they can be enormous -- but rarely of the incredible progress we have made as well. The progress is invisible and assimilated; the failures become news.

I'm hoping to put this (and many other thoughts) together in a book (current working title: "Bimodal, Trimodal, Devops and Tossing it over the Fence: a better practices guide to supporting software") -- sign up for updates about the book here:  http://eepurl.com/bMYBC5
If you like this series -- and care about making organisations run better with better tools -- you'll probably find my automated estimator of effort and duration very interesting.
Greg Baker ([email protected]) is a consultant, author, developer and start-up advisor. His recent projects include a plug-in for Jira Service Desk which lets helpdesk staff tell their users how long a task will take and a wet-weather information system for school sports.
Posted by Greg Baker at 10:44 No comments: 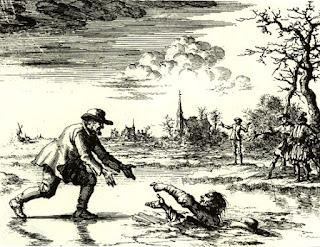 This is the fourth (and probably last) in my series of blog posts about how we unknowingly often let our IT determine how we communicate, and what to do about it.

Teams need to communicate at three different speeds: Tomes, Task Tracking and Information Ping-pong. When we don’t have the right IT support to for all three, things go wrong. This week I'm writing about Task Tracking.

I lose my luggage a lot. Domestic, international, first world, developing nations; I’ve had travel issues in more places than most people get to in their lives. I’ve even had airlines locate my lost luggage and then lose it again in the process of delivering it back to me.

Two of the more recent lost luggage events stood out by how they were handled:


I felt much more confident about the mumble from the junior than the eloquence of the senior.


Having the manager’s name and assurance gave me no such confidence, but instead the sure knowledge that if I called the manager, the manager would have to get back to me (i.e. go and query the staff member he had assigned). This process would have consumed staff time and effort; which meant that if a large number of people had lost their luggage and were all asking the same question, that there would be gridlock and thrashing (so many interruptions that nothing gets completed).

In your team, who is busier? The team leader / project manager, or the technical staff doing the work?

If someone needs something from your team, how is that work tracked? Do they have someone senior that they call, or can they find out what they want to know wasting no-one's time but their own?

In a sensible, well-run organisation the staff with more seniority should have more idle time than the staff who report to them. Otherwise, they are the bottleneck holding back the organisation's efficiency.

If this is happening, then something is wrong with the way ticket tracking is being done.

The most common ticket software systems tend to be helpdesks or service desks because the scale of such organisations usually make it essential It is almost impossible to live without them in software development once the software has reached the complexity experienced in a very minimal viable product.

But ticket-tracking can be done with almost any technical team inside or outside of IT. Here's my list of the minimum requirements for a ticket-tracking system to be useful:

DUAL FACING Ticket tracking systems convey two important pieces of information: that something is being worked on (or that it isn’t) and what tasks people are working on.

On the one hand, the system needs to be easy for end-users to see where their request is up to which is why tracking tasks in a private spreadsheet doesn't work.

The ticketing system should automate messages to requesters, create follow-up surveys when the ticket is resolved, and so on.

On the other hand, the ticketing systems needs to be fast and efficient for staff to update, or else staff will batch their updates in a large chunk at the end of the day or the end of the week. It also needs to provide reporting to management to provide a high-level overview.

ENUMERATED You want discussions to be about "LTS-203" not "the project to update the website branding" so that everyone is on the same page. The tracking system has to provide a short code that you can say over the telephone or in a conversation, and that usually means some kind of short string of letters (perhaps three or four, or a pronounceable syllable) followed by a number. If that number is 7 digits long, you have a problem, because no-one will remember it, nor be able to say it.

EMBEDDABLE Whatever you are using for your tomes and reporting, you want to be able to embed your ticket information into it, and have the status there automatically update. This makes project meetings smoother and more efficient, because you can embed the ticket into the minutes and quickly glance back to last week’s meeting notes to see what needs to be reviewed. If software projects are involved, then being able to embed ticket references into the revision control system is very helpful.

UNIVERSAL If the entire organisation can work off the same ticket tracking system, that is ideal. One client I worked with had numerous $100,000+ projects being blocked -- unable to be completed -- because another (unrelated) department had delayed some logistics for efficiency. It required months of investigation to uncover -- which should have been possible to identify by clicking through inter-team task dependencies.

ADAPTABLE In order to be universal, the workflow needs to be customisable per team and often per project. For some teams, To-Do, In Progress and Done are sufficient to describe where the work is up to. For others, there can be a 20-step process involving multiple review points. ITIL projects often end up clunky and barely useable because the One Universal Process for all Incidents is really only necessary for a handful of teams, and the rest are forced to follow it.

LOCK-FREE When a project is urgent you will have more than one person updating a ticket at the same time. This isn't the 1980s any more: it's silly and inefficient for one user to lock a ticket and leave someone else idle, unable to write. Time gets lost, and more often than not, the update gets lost as well.

PREDICTIVE We live in an era of deep-dive data mining. It's no longer acceptable to say to a customer or user "we have no idea how long this is going to take" any more than an advertising company could say "we don't know how much money to spend on your campaign". And yet, I still see helpdesks logging tickets and giving no indication to their user base of when to expect the ticket to be resolved. At the very least, make sure your ticketing system uses my three rules of thumb. Or better still, make sure it works with my Automated Estimator of Effort and Duration to get the best real-time predictions.

That seems to be the most important seven criteria.


Be aware that if the nature of someone’s job is that they will work on the same problem for months or years -- for example, a scientific researcher -- there’s probably little value in ticket tracking because there would be so little information to put in there. Likewise, if someone’s job is to do hundreds of tasks per day, then any ticket tracking will have to be automated by inference from the actions or else the overhead of the tracking system might make it impractical.

I'm hoping to put this (and many other thoughts) together in a book (current working title: "Bimodal, Trimodal, Devops and Tossing it over the Fence: a better practices guide to supporting software") -- sign up for updates about the book here:  http://eepurl.com/bMYBC5

Greg Baker ([email protected]) is a consultant, author, developer and start-up advisor. His recent projects include a plug-in for Jira Service Desk which lets helpdesk staff tell their users how long a task will take and a wet-weather information system for school sports.
Posted by Greg Baker at 11:44 No comments: