As you might know, I've written a robot called AEED which looks at work tickets and predicts how long that job is going to take. I designed it to solve the black-hole problem of service desks: instead of "we'll get back to you", it's "your request will take around 4 days". If you happen to run JIRA in the Atlassian cloud (here's the marketplace link) or HP Service Manager it's definitely worth a look.

As it turns out, it's also giving surprisingly good predictions for software development and other kinds of projects too.

Anyway, some fun: now I've got some comprehensive data across a good number of organisations.

Rule of Thumb #1: Each hand-off adds about a week. 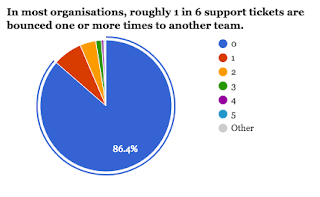 Initially I didn't believe this: whenever I've done any sysadmin work if someone ever assigned a ticket to me and it's not something I could do anything about, I would just pass it on to someone more appropriate as soon as I saw it -- a few minutes at most.

But that's not quite it, is it? The ticket sits in your queue for a while before you get to it. Then you second guess yourself to wonder whether it really might be something you are supposed to handle and waste a bit of time investigating, during which time you will get interrupted by something more high priority, and so on. Then you might need some time to research who it is supposed to go to.

I've seen numbers as low as 4 days per re-assignment in some organisations, stretching up to two weeks for others. 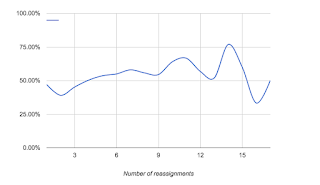 Whenever an organisation gets bigger than Dunbar's Number, the mis-assignment rate starts shooting up (as can get re-assigned absurdly large numbers of times, as in the chart above). Which makes sense: no longer does anyone know what everyone is doing. (I've got a long-ish presentation about this). 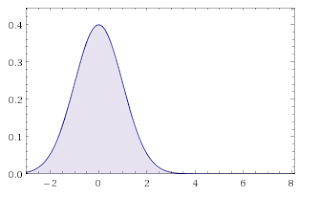 I didn't expect that just having the word "MEETING" appearing in a JIRA ticket would be a signal for a long duration. But, wow does it ever make a difference: 8-10 standard deviations of difference in how long the ticket will take!

The actual effect is often only a few days extra, but it's a very, very definite effect.

Some people might interpret this as saying "don't have meetings, meetings are bad". I don't think this is what is going on here; if a customer or tech is writing a work ticket and mentions a meeting, it probably means that the issue really can't be resolved without a meeting. If an INTP or INTJ computer geek says that a meeting is required, it's very unlikely that they are having a meeting for the sake of having a meeting.

But, any meeting has to fit into everyone's work schedules, and that can introduce delays.


Rule of Thumb #3. Not much gets done on Wednesday

I was digging for data that showed that Friday afternoon is the worst time to raise a helpdesk ticket because everyone would be slacking off. It turns out not to be the case at all: in all the organisations I've got, everyone is more-or-less conscientious. Perhaps they make a Friday afternoon ticket a top priority for Monday, or otherwise make up for lost time.

But Wednesday? It's not true in every organisation, but it was there for quite a few.

I can only guess why. My guess it that people have less time on Wednesdays because they are called into meetings more. Nobody would organise a meeting for a Friday afternoon if they can avoid it; likewise Monday morning is often avoided. But need to call a meeting on a Wednesday? No problem!

Greg Baker (gregb@ifost.org.au) is a consultant, author, developer and start-up advisor. His recent projects include aplug-in for Jira Service Desk which lets helpdesk staff tell their users how long a task will take and a wet-weather information system for school sports.
Posted by Greg Baker at 13:04