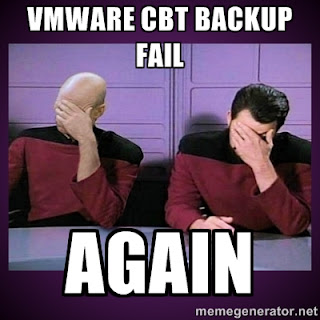 VMware has announced another CBT problem. Just a reminder, this is not a problem that HPE can do anything about in Data Protector -- it's a problem with the APIs that VMware have supplied for HPE to use.

If you are doing VEAgent backups of your VMware environment (which is quite common) and you have any incrementals scheduled (also quite common), and you are running ESX 6 (which is lots of people) and you are using CBT (which you really, really would want to do normally).... then you might want to be aware that (yet again) VMware have announced that your backups could well be painfully broken.


There are several solutions:


Less easy solutions, but things to think about:

Greg Baker is an independent consultant who happens to do a lot of work on HP DataProtector. He is the author of the only published books on HP Data Protector (http://www.ifost.org.au/books/#dp). He works with HP and HP partner companies to solve the hardest big-data problems (especially around backup). See more at IFOST's DataProtector pages at http://www.ifost.org.au/dataprotector, or visit the online store for Data Protector products, licenses and renewals athttp://store.data-protector.net/